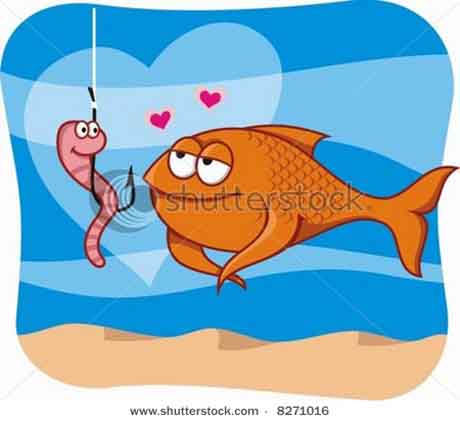 How would it feel to be reeled in by a hook in your mouth?  How do we get trapped by the enemy into stumbling? The hook doesn’t come alone. It is covered with something attractive that’s customised for you and me to want to take it in.

What’s appealing to the eye draws our attention.  Taking a second look, our hearts could get drawn in too.  One pastor, in his preaching, said that to keep him from sinning, he will avoid that second look on a beautiful woman and walk right on.  What do you need to keep your eyes away from because you know it will awaken something in you that will lead you to stumble? A slot machine? A magazine that tells you all the must-haves for the month? Material that’s a source of subtle or blatant godlessness?

What’s your advanced plan on not getting reeled in by the enemy through your once-favourite sin?

Here’s an eye opening teaching on Temptations from Deonna Tanchi:

Understand Temptations.  Be realistic and ready. They are coming. (“When” not “If” tempted).  None of us will be exempt. Satan knows how to custom-make the temptation for you.  To be tempted is not a sin but to give in to temptation is a sin.  Don’t blame God. Be responsible. Be focused on God. Be responsive to God’s word.  Sin brings forth death.

James 1:13  When tempted, no one should say, “God is tempting me.” For God cannot be tempted by evil, nor does he tempt anyone; 14 but each person is tempted when they are dragged away by their own evil desire and enticed. 15 Then, after desire has conceived, it gives birth to sin; and sin, when it is full-grown, gives birth to death.

How do you catch fish?

Why would the fish bite a hook?

The hook is Satan’s trap.  But the bait is how he entices us and he knows the bait that you like and he’s putting it on the hook…

Everyone says, “Satan made me do it.”  No, he just sets you up.  But you do it.  You have to be responsible.  You cannot blame your mom, your dad, God, Satan.  Just look at yourself in the mirror and say, “it’s your fault.”… We are carried away and enticed by our lust and it leads to sin.  And sin leads to death.  It causes death to relationships, it causes death to your spirit.  If you’re a child of God, it doesn’t cause eternal death but if you’re continually in sin, then you better check if you’re a child of God because the Bible says that if you belong to Him, you will not keep on sinning…

Don’t be deceived, my beloved brethren, it’s our fault…  But you can do something about it.

1 Corinthians 10:13-14  No temptation has overtaken you but such as is common to man.

Have you heard this excuse, “But you don’t know how strong the temptation was!  It’s really a very difficult one.  No, I don’t think anybody else has this temptation.”

I’m sorry, you’re not unique.  Nor is your temptation.  The bible says:

No temptation has overtaken you but such as is common to man.  And God is faithful who will not allow you be tempted beyond what you are able. But when you are tempted, he will also provide a way out so that you can endure it.

He knows. He calibrates. He knows what you’re able through Him.  You don’t have to give in to sin.  But with the temptation, He will provide the way of escape also so that you will be able to endure it.   Therefore, my beloved, flee idolatry…

Help us to not get reeled in by the enemy because of our blindness to the hook. The enemy seeks to kill, steal, and destroy.  Help us not to fall in love with and be deceived by enemy baits.  Open our eyes and hearts wide to the Way Out of Escape from our temptations in Jesus’s name and for His glory, Amen.