I came across a book by John Bevere entitled “The Bait of Satan, Living Free From the Deadly Trap of Offense”. 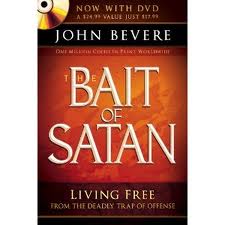 In Matthew 24:10 KJV, Jesus referring to the last days says,   10And then shall many be offended, and shall betray one another, and shall hate one another.  Offense leads to betrayal which leads to hatred.

When we are genuinely offended by someone, we walk through the threshold of the enemy’s snare, vulnerable to stumble.  The bigger the hurt, the bigger the snare. It is those times when we are most likely to be angry, commit sins of the mouth, withhold unforgiveness… and in the world’s eyes, justifiably so.

John Bevere points out that a believer “who can not forgive is a person who has forgotten what he has been forgiven of.” We step into character of the forgiven but Unmerciful Servant (Matt 18), who asked the offender to pay up his debt and had him thrown in prison. Upon learning of this, the Master called back the previously forgiven unmerciful servant. 34 In anger his master turned him over to the jailers to be tortured, until he should pay back all he owed.  The new consequence was that the unmerciful servant became accountable again for his canceled debt, he was put in prison and tortured until his debt should be paid (which would have been impossible considering the extent of that debt). We are unable to pay for our own sins, so in withholding forgiveness, we trade in our freedom from debt to a perpetual debt.

When we withhold forgiveness, we also build a prison for ourselves enslaved to our offender. Unknowingly, we can see that offender in others and react disproportionately to others.  To withhold forgiveness is like torture for us. When that offender asks for forgiveness from God, he will be forgiven. We on the other hand, would still be tied in compounding knots between the hurt, anger, and hatred.  Ruth Graham said that “Forgiveness is like a drinking a poison thinking the other person will die”.

What about our offender(s)? Luke 17 KJV says 1Then said he<Jesus> unto the disciples, It is impossible but that offences will come: but woe unto him, through whom they come!  That “woe” goes to the offender. God will take care of the offender in His perfect way and time.

Dear Lord, You know what I have been through. Please help me to remember how You have forgiven me from my past, present, and future sins, and even the sin of unforgiveness towards my offender. I surrender my offender(s) into Your hands. You hold me accountable only for my own actions. You said vengeance is Yours and not mine. You will repay. Please forgive me for all the times that I already stumbled through my thoughts, words, and deeds. Please guard me from more stumbling. Please empower me by Your Spirit to not fall into the trap of the enemy me so that nothing will withhold Your forgiveness to me and that nothing will hinder me from experiencing the freedom that You want for me in Jesus’s name amen.