Just twenty-one miles from the US-Canada border in British Columbia, the Fairhaven, Washington (USA) community was established in the late 1880’s; it became one of three cities [the other two being Whatcom City and Sehome] that formed Bellingham, the largest city of Whatcom County, Washington —famous for Vancouverites to do their US outlet shopping (think lower tax).

Today, Fairhaven is the terminus for Alaska’s ferry system, the point of departure for San Juan Islands or Victoria, B.C. (during the summer months), has a Greyhound bus depot, and the Amtrak Cascades (Bellingham) station with connections for local transport— making it a convenient transport hub between Vancouver, Canada and Washington, USA.

Heidi gave me a choice of Fort Langley, Canada or Fairhaven, Washington and since this has been my only offer to see Washington State, I chose Fairhaven! 🙂

At the Canada/ US border which was about a half hour from Richmond, we had to park and line up for immigration inspection. Heidi had to line up with me; I paid USD6 and got an I-94 document from the officer. I wish they would have metal detectors at the entrance for the sake of the officers. This was the first immigration facility I’ve encountered which did not seem to have security reinforcements. [For the evening return into Canada, it would be a drive-thru inspection.] 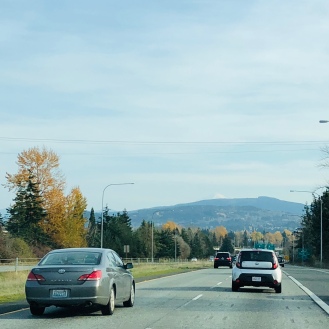 Then we were on our way! [If you come this way and are on data roaming, please take screenshots of the navigation as signal dies until you get close to Fairhaven, at least on Globe Telecom.]

In less than an hour after getting my I-94, we were paying for parking outside the downtown cafe of Mount Bakery, famous for “The Best Benedict in town,” handcrafted food, and baked-from-scratch pastries!  Its name is a fun pun for Mount Baker, the second most thermally active cratered volcano after Mount Saint Helens, and the second most heavily glaciated after Mount Rainier of the Cascade Range… one of the world’s snowiest places!!!

Heidi and I enjoyed our delicious Portobello Benny; seasonal Crepe with Brie, Pumpkin Butter, turkey, apple slices, and bacon! I loved my apple cider and we got the last piece of their scrumptious must-try Truffle (firm fudge-like consistency at first bite but silky and melts in your mouth with a perfect not-too-sweet flavor that roars a sexy “CHOCOLATE!”) 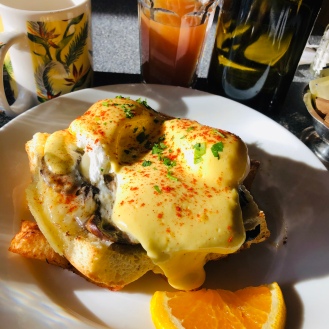 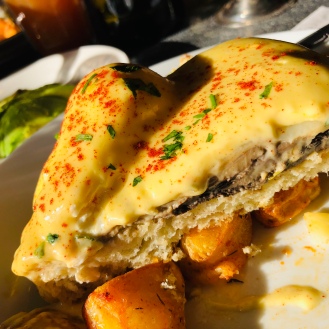 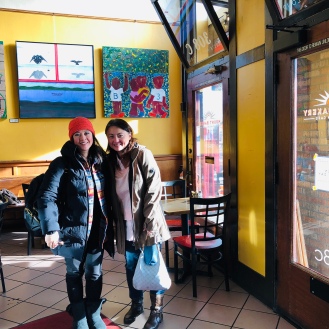 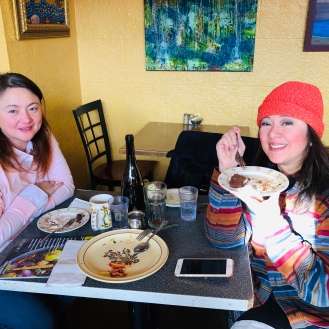 After a very gratifying breakfast, we drove about ten minutes to the Historic District [where we discovered there is a branch of Mount Bakery too!].  If you come here on a summer weeekend, you might be able to catch a movie at Pickford Outdoor Cinema at the Fairhaven Historical District where its iconic 19th century style architecture preservation is mandated by law, even for new buildings! 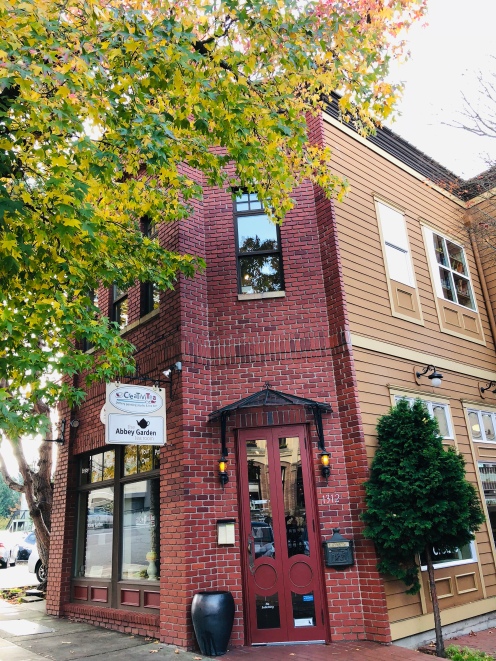 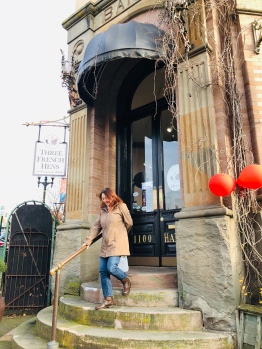 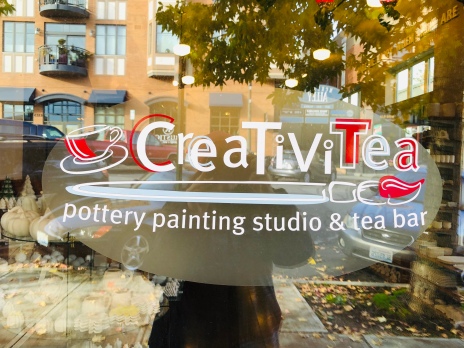 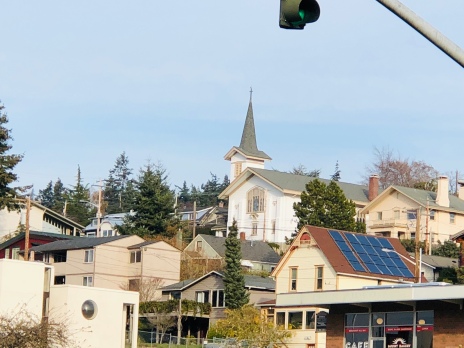 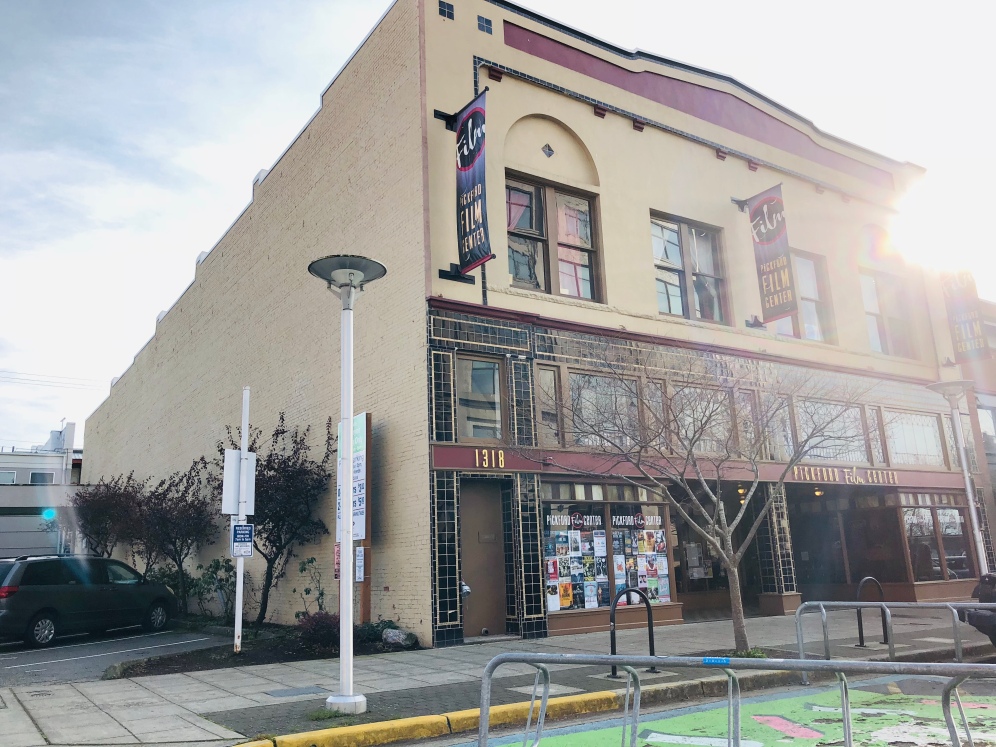 We went to The Village Books and Paper Dreams, the legendary three-storey community-based bookstore and gift shop (with a branch in Lynden, Washington) which allows us the I-hope-will-never-be-obsolete pleasure of walking into a room full of paper books to explore. You can linger at the bookstore’s Evolve Chocolate + Cafe overlooking the village green or go deeper in the back to the popular ColophonCafe. 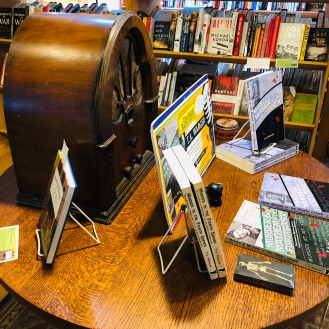 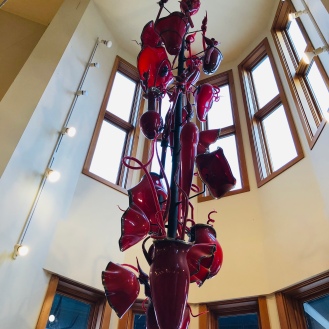 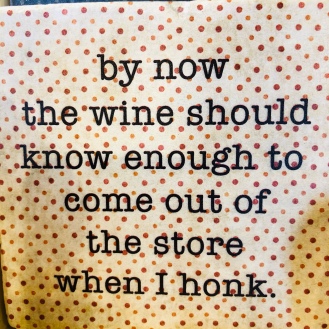 The Village Green next to the Outdoor Community Theater across Colophon Cafe’s front entrance:

If you exit The Village Bookstore through Colophon (which is actually this cafe’s front door), you will see the Community Theater outdoor stage for community performances.

By the front entrance of Village Books, you can sit awhile with [Artist Gary Lee Price‘s bronze sculpture of] Mark Twain (Samuel Clemens) with a copy of his book, Huckleberry Finn.

Heidi and I stopped by Drizzle where the stunning display of olive oil and vinegar in metal vats caught our attention.  While news on fake (even popular brand) olive oils proliferates globally, here you are guaranteed authentic, meticulously curated olive oils. Dana Driscoll, who co-owns the shop with her husband Ross, is an RN, BSN, and Oncology Certified Nurse with first-hand appreciation for the health benefits of olive oil’s antioxidants and monounsaturated fats. 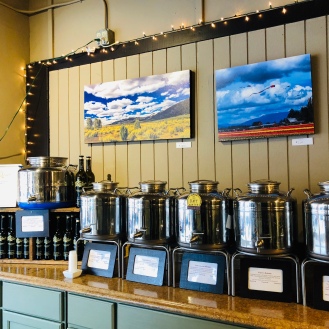 Ross gave a brief explanation of the different uses of Olive Oil, even back to biblical days:

His brother, Ryan, gave us tastes of the impressive olive oils and vinegars, some pressed just the month prior. [This is going to mess up my store-bought olive oil experience from now on.] They also have some spices and we were able to get excellent truffle salt [easy to pack despite two more destinations before home].

A side door from Drizzle connects to a kitchen studio and gift shop that sells perfectly complementing products: 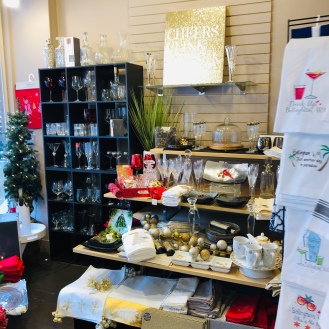 A statue of J.J. [John Joseph, Nickname “Jack”] Donovan with a reproduction of his letter to his would-be wife, Clara, sits on a street corner at the Historic District.  In the featured letter, he talks about Bellingham, Sehome, Whatcom, and Fairhaven— where they would both move a year after getting married.

Mr. Donovan played an important part in the development of Bellingham. He was the engineer who built Fairhaven and Southern Railway and then later further construction of the railroad to Blaine, Washington and New Westminster in British Columbia, Lake Whatcom, and Wickersham… connecting Fairhaven to the outside world. In 1890 after Fairhaven became a city, Mr. Donovan served on the city’s councils while developing the city’s sewage system. He helped build St. Joseph Hospital to serve the community.  In the field of education, he served on the Board of Trustees of what is now Western Washington University.  Mr. Donovan was known for his good moral character and principles.😍

This was a very interesting step back in time while bonding over good tummy and soul food and catching the last glimpses of Autumn Foliage.

Thank You, Lord for this gift!